Congratulations Meghan Josling who brought home 3 Golds in the Ontario Provincial Winter Special Olympics.  Snowshoeing the 10km, 5km and 1600.  She is Ontario's fastest long distance female!  Thanks to coach Donna who has inspired and taught Meghan so much and given generously of her time and energy!  The Brantford Team Rocks!!!!
OFSAA XC - November 5, 2017
Ethan Summerhayes placed 64 out of 270 in the XC Junior Boys.  Ethan had finished 3rd overall at SOSSA to qualify for OFSAA.
Canadian National XC Championships
Kingston,ON
November 26, 2016
Masters
Brent Hutchinson Masters 8km - 34:45

GREAT LAKE LEAGUE MEET # 3
On Wednesday, July 16th, Coach Doucette and his throwers travelled to St. Thomas to take part in the Great Lake League's Meet #3.  Youth girl, Holly Taylor continued her excellent season, Winning Gold in the Javelin with a distance of 38.40M, Bronze in the Discus with a distance of 26.04M and just missed a 3rd podium, finishing 4th in the Shot put (11.03).  Midget girl, Kailee Cherewka, also had an outstanding meet with 3 podium finishes.  Kailee placed 1st in the Shot put (9.55M), 2nd in the Discus (21.08M) and 2nd in the Javelin (18.79M)

WEEKEND WRAP UP (2014)
As the 2014 Track & Field season winds down, a number of BTFC athletes were still out competing this past week.  On Wednesday, July 9th, our throws crew were in Kitchener at the Great Lake League Meet # 2.  Holly Taylor took 1st in the Girls Shot put with a distance of 11.11m., Kailee Cherewka finished one place back claiming Silver with a distance of 9.69m.  On Saturday, July 12th, Noah Defreyne, took part in the RCL Provincial Championships on a very hot and humid day in  Brampton.  Noah wrapped up a very successful season finishing 4th in the 3000m in a time 9:09.

On Sunday, July 13th the London Runners Distance club held the season finale of their five race series.  Jaime Gareau wrapped up his season finishing 6th in his 800m heat in a time of 2:23.38.  Megan Wilcox, also ran the 800m and finished fourth in her heat in a time of 2:27.36.  Stephanie Johnston, running her final track race before heading to Ann Arbour, Michigan's Concordia University ran an incredible PB in the 5000m in a time of  18:31.16.  This is over a minute faster then Steph's previous best.

Race video's of Jamie, Megan and Steph can be viewed here. 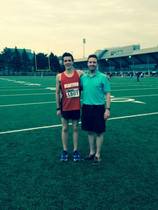 Youth athlete Noah Defreyne, (shown with Coach Currie), competed in the 3000M at  McMaster University Twilight meet, in Hamilton on June 23rd.  With many runners looking to set World Junior qualifying standards the meet was set up to run some very fast times.  Noah raced to an 18 second PB of 8:53, which now ranks him 3rd in the country for Youth  aged athletes.

COMPLETE RESULTS
2013-2014 HAS BEEN A BANNER YEAR FOR BTFC ATHELETES
As the high school year comes to a close, many schools have held their annual athletic awards banquets.  Thus far BTFC has been well represented:


SUCCESSFUL WEEKEND FOR BTFC ATHLETES
BTFC athletes from all ages put in some very impressive performances this weekend.

Beginning with OFSAA, Kyle Madden got things started in the Jr Boys 1500m with an outstanding 5th place finish in a time  of  4:07.82.  Noah Defreyne, raced to a personal best time of 9:11.36 in the Jr Boys 3000m finishing in 5th place.  Holly Taylor, added another PB result with her 6th place finish in the Jr Girls Javelin, with a toss of 33.30m.  In the Mid Boys 200m, DJ Armitage Charlton raced in a tightly contested semi final, finishing 15th in a time of 23.77.  This time was less than a second from qualifying for the finals.

Senior competitor, Josh Bolton, capped the fine weekend, with a 3rd place finish at the Bread & Honey 15km road race in Mississauga.  On a very difficult, hilly course, Josh finished in a chip time of 49:33.2.

Full results for all races: 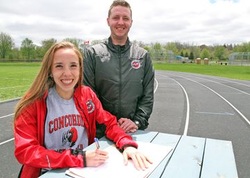 Stephanie Johnston, shown here with Coach Currie has earned a scholarship to NAIA school Concordia University in Ann Arbour Michigan.  Stephanie will be competing for the Cardinal's in both Track & Field and Cross Country in the Wolverine–Hoosier Athletic Conference.

OFSAA West Regionals will take place May 30-31 in Windsor.  BTFC will be represented by:

BTFC DOMINATES FIELD AT 32nd BRANTFORD ROTARY CLASSIC ROAD RACES
BTFC athletes had an outstanding day at the 32nd Annual Brantford Classic Run on April 27th claiming 6 of the top 11 places in the 5km, Including Top Overall Woman and Top spot in the 10km.

JOSH BOLTON EARNS SPONSORSHIP
Senior athlete and soon to be University of Windsor Grad, Josh Bolton,  will be entering his post collegiate running career with a new sponsor.  Skechers Performance and Bolton have recently agreed to a full sponsorship. 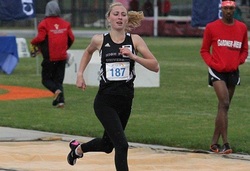 Cozette accounted for 21% for her teams total score!!

COZETTE COLLIN WINS!!
Brantford's Cozette Collin, representing High Point University, was victorious at the Aggie Invitational in Greensboro, N.C.  Cozette racing the 1500m crossed the line in a time of 4:43.38, 4 seconds ahead of the second place finisher.  Later in the day Cozette also ran the lead of leg for the Panthers 4x400 relay team. 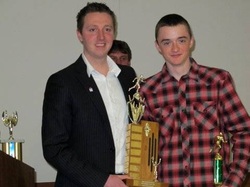 YOUTH OLYMPIC GAMES
Kyle Madden (shown with coach Cory Currie accepting his award as outstanding first year registered athlete 2013) has officially been selected to Team Canada and will be competing, April 5th, in Florida at the North America, Central America & Caribbean Youth Area
Olympics Championships.  Kyle will be racing in the 3000m, where he is currently ranked 3rd in Canada for his age group.  (1998) 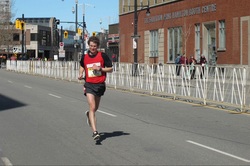 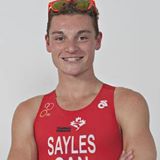 GOLD & SILVER for Ben Sayles.
OUR VERY OWN WORLD CHAMPION!

HUGE congratulations to Ben Sayles who placed 1st & 2nd at the World Triathlon Championships in London, England.
He came just behind a Norway athlete by 8 seconds. Good job Ben !!! 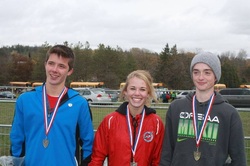 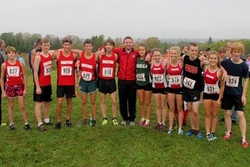 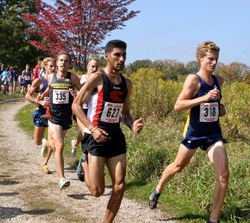 ROOKIE OF THE YEAR!!
Congratulations to Tyler Van Leeuwen who had a great freshman cross country season! 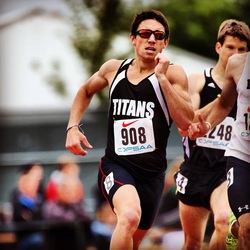 Congrats to Freshman Tommy Land who won the1000m @ University of Guelph meet, cruising to a time of 2:33!!
check out his winning video on TrackieTV 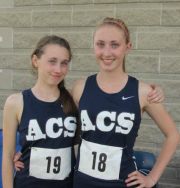 Cozette and Samara Collin both place 2nd in the 800m event at  CWOSSA championships. Samara competing in the junior girls 800 ran a new personal best of 2:28. Cozette ran in the senior race also running a new PB of  2:18 and came 3 seconds behind 2011 OFSAA Cross Country champion Jamie Phelan. We had a total of 8 athletes’ make it on to OFSAA west regional’s which will take place June 1-2 in Windsor. Good luck athletes!

For CWOSSA results please click on the link below. 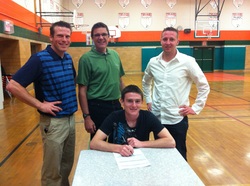 T J.R Tangi has signed a letter of intent to join the North Iowa Area Community College Trojans cross country and track and field teams. While there, Tangi will study in the school’s automotive program to follow his father’s footsteps as a mechanic.

"I never would have thought I could achieve something like this,” Tangi said.
“But ever since training with Cory (Currie), he’s opened my eyes to it.”

Tyler Van Leeuwen from St. John's College was going to take on pals J.R. Tangi and Riley Malcolm from North Park Collegiate. Three hours earlier, VanLeeuwen warmed up with a victory in the meet’s first event, the 2,000-metre steeplechase.

“To be truthful, I was just happy to win,” VanLeeuwen said. “After a tough year in cross country, to win the steeple and the 1,500 metres is pretty nice.”
The record was icing on the cake, especially since the old mark belonged to VanLeeuwen’s coach.

“He's an awesome guy and an awesome runner,” VanLeeuwen said. “It feels great to beat his record. It was a bit of a surprise, but a good one.

Read the full article at the below link